This post is open for any discussions anyone might want.  Just go to comments, the only field necessary is the comment field (this will post as anonymous), the others are optional.  Unmoderated (until after the fact if necessary).

“As dashcams mysteriously fail and America’s thin blue line coils protectively around itself, Chicago nonprofit the Lucy Parsons Labs has created a new, interactive website to make it easier for Chicago residents to file complaints against police officers.”  https://sputniknews.com/us/201610221046624732-website-helps-file-police-complaints/

“When I went to traffic school for that citation, the instructor confirmed my instincts. “When you’re stopped, I’d strongly advise you not to talk back,” he said with a smug grin. “If you do, any cop can find five or 10 things to write you up for.”

Sandra Bland probably understood the nature of this reality. She cooperated with the Texas state trooper who pulled her over for her trivial failure to signal a lane change on a mostly empty street.

But when she failed to grovel sufficiently, he demanded an explanation—and didn’t like the one he got. Soon he was angrily yanking her out of the car, taking her to the ground and handcuffing her. Why did the confrontation escalate out of control? Not because Bland violated the laws of Texas, but because the cop felt unconstrained by them.

The only reason police brutality has come to light via video cameras is that some officers are so used to committing it that they never dream of being held to account.

It’s no secret that they can and do get away with lying. A prosecutor I know once marveled at how often motorists leave illegal drugs on the front seat, where they can be easily spotted by police during stops. His implication was that the cops conduct illegal searches and afterward invent stories to make them appear legal.

The officer who stopped Bland knew a dashboard camera was recording him—yet he proceeded to flip out.

He acted on a view that too many cops have and that civilians learn at their peril: The police are obligated to enforce the law, not obey the law. ”

The piece, which The New York Times published online, states, “We are all aware of the all too frequent news stories about the mentally ill who come up against law enforcement instead of mental health professionals and end up dead.”

This is what happened to Danner—and 182 others this year. Twenty-three percent of all people police have killed this year suffered from mental illness, according to The Washington Post. Her essay references the death of Eleanor Bumpurs in 1984, another Black woman in her late 60s with a history of mental illness. She was killed her in her Bronx apartment by Officer Stephen Sullivan.

The New York Daily News reports that Danner shared the essay with an attorney who represented her in a guardianship case. He released it after hearing of her death.

The essay also touches on the hardship of her mental illness, which she calls a curse and a nightmare. Danner writes about stigma in the workplace, family tensions, suicidal thoughts and the flashbacks of moments where she experiences a “blue funk,” as she called her episodes.

“I smile rarely,” Danner concludes, “but I am surviving.””https://www.colorlines.com/articles/essay-2012-deborah-danner-discusses-how-police-treat-people-mental-illness 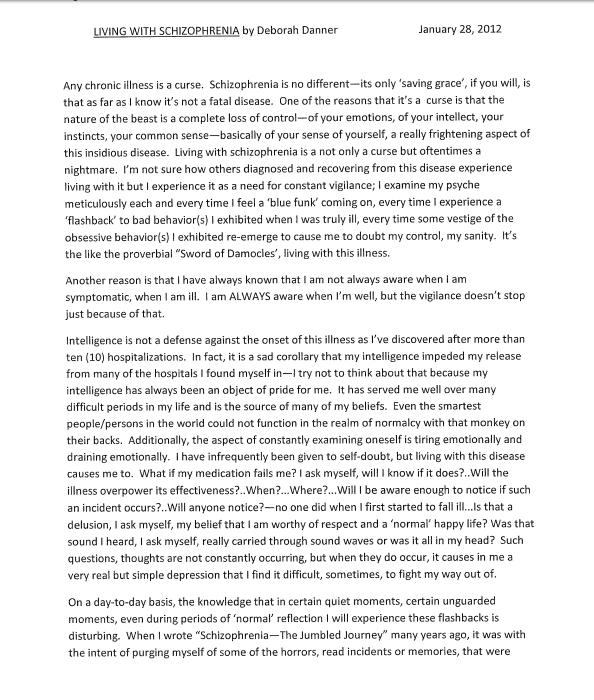 I mean they wouldn’t want to preserve the evidence of their guilt, right?  Destroying the evidence would be the felonies of tampering with evidence and obstruction of justice.  These charges might be easier to prove than murder, so that could be one reason to leave a crime scene untouched.  Of course rogue cops would go ahead and hide the evidence, there’d be both shooters and a clean up crew – can’t leave shell casings lying around now.  So this means the crews weren’t rogue, weren’t bad apples but rather that the police departments, in question, were themselves criminal. Here the crime scene was left untouched and unsealed.  State’s Attorney Hanrahan claimed it was a shootout.  If true, forensics would have proved that.  All the shots but one were from the outside in (the one outgoing shot was from Mark Clark, who was also killed, at the front door).  Fred himself was already heavily sedated and couldn’t be woken up (inside enemy apparently).  He was shot in his sleep.  Fred Hampton’s friends and Panther comrades did the scientific evidence collection themselves.  http://www.hamptonbook.com/Hampton_Book/Home.html

It seems activists need to train themselves in crime scene evidence collection.

Local St Louis activist Heather De Mian said she was disturbed by finding various pieces of debris and what appeared to be shell casings left behind by police investigators from the vehicle where Seals had been found.

“The memorial is constructed on top of his car door, which the police just left there,” De Mian said, the Washington Post  reports. “You would think the car door would be important evidence, that there might be fingerprints, you know. The police just left it there.”

Some accounts (main stream media reports) state Darren Seals actually died from being burnt alive not from the gun shots.  That would make the killers psycho killers, the way I look at it.  Some five or so Ferguson activists have been found dead in burning cars.

St. Louis County Police Chief Jon Belmar, anything to elaborate?  I would welcome being proven wrong.

Like any blog writer I’d be delighted to convert writing this into my livelihood.  That’s hard to do of course.  If I had the freedom (time and money, modest amount) I could publish three or so researched, thought out posts a week, plus supporting the blog in social media.  More support could enable me to add interviews and podcasting.

Areas for this blog to explore:

As a parallel effort I will also be seeking crowdfunding to mount a FOIL (Freedom of Information Law) campaign on the NYPD use/misuse of of the Minnesota Multiphasic Personality Inventory (MMPI) test.  Are they really seeking violent, unempathic individuals as cops (https://keepcopsnormal.org/2015/03/09/the-eric-garner-murder-nypd-stop-hiring-psycho-ward-cops/)?  Another FOIL subject could be the NYPD databases.

Perhaps at some point KeepCopsNormal could become a national FOIL organization.  But that would take massive funding.

I’m half joking, it’s almost impossible to know the exact percentages.  Personally, I believe, for the NYPD, it’s very high — judging from the sheer number of undercover officers that I recognize that I also think are psychopaths.  Also being an undercover officer would be very attractive to psychopaths.

Recognizing undercover police officers is on a need-to-know basis.  If you need to know, you will gain the ability to recognize them.  Basically, cops pay attention differently than others, also their intent is always different.  For example a crazy person standing and staring into the sky has one intent, a cop standing and staring into the sky in exactly the same position has another, namely the intent to look like a crazy person.

These cues are very subtle, too subtle for someone without the need to know to pick up.  One can’t be trained to do so, but one can learn to.

The subconscious mind is much more powerful than the conscious mind.  I’m not making this up.  Scientists Prove that Your Brain is Actually Smarter Than You Are.

No psychopath should ever be allowed to join any police force.